This month we shine the Spotlight ON! Mark Prucha.

Mark Prucha comes from Naperville, Illinois. Although Mark is well-versed in guitar, ukulele, and piano, he considers the steel guitar his primary instrument. 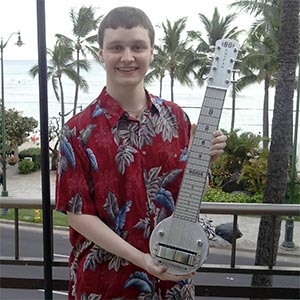 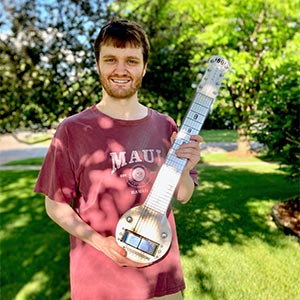 Mark in 2021 with his Excel Frypan

Mark talks about his introduction to Hawaiian music and instruments.

"In 2008, my family took a trip to Hawaii. At that time, I had already been learning the guitar for over two years. So while I was in Hawai‘i, I bought a ‘ukulele as a supplement for my guitar. It taught me a lot about key changes; for example a D chord on a guitar would be a G chord (five frets higher) on a ‘ukulele. I have been playing the ‘ukulele since then, in addition to my other instruments.

"In 2009, we returned to Hawai‘i, and in 2010 we returned again. Before the return in 2010, my dad played a Hawai‘i Calls CD that he had, and I heard the authentic Hawaiian Steel, something I had heard before, but not quite the same. It had a much richer sound than I had ever noticed before. I decided I wanted to learn the steel so I bought an SX steel guitar. I taught myself basic tabs on it, but didn't really know anything about technique, something very important for an instrument like that. So I decided I needed extra help, and when we returned to Hawai‘i in 2010, we went to the first annual Waikīkī Beach Walk Steel Guitar Festival. There I observed many players' technique."

Mark returned home and discovered that the Hawaiian Steel Guitar Association's annual conventions were only 20 miles from his home in Illinois, so he joined the HSGA and attended their fall convention in 2010. In spite of meeting many new friends and gaining many helpful tips he was unable to develop on his own the rich old Hawaiian sound that he had heard at the convention. An investment in a Fender steel guitar produced an improved sound but it still wasn't quite what Mark desired.

While at the Waikīkī Beach Walk Steel Guitar Festival in 2011 he met Alan Akaka and was further inspired to learn more about the instrument and playing techniques. Upon returning home, Mark reached out to Alan Akaka and discussed his background and desires.

Alan Akaka recalls his comments to Mark at the time: "Mahalo for sharing with me your background and what led you to the steel guitar. You and countless others were drawn to the steel guitar and some like my teacher Jerry Byrd actually made it a vocation." It was at that time that Mark began his steel guitar lessons with Alan via Skype.

A Star Is Born

At the 2013 HSGA Convention, hula entertainment was provided by Illinois-based Hula Association of the Midwest, headed by Le Ann Cabanada. Her husband Ron was in attendance and took note of Mark's steel guitar performance. As the head of Hawaiian music group Hoapili Ron was interested in adding a Hawaiian steel guitar to his group. Alan introduced Mark to Ron, and they discussed the possibility of adding a steel guitar to the group. 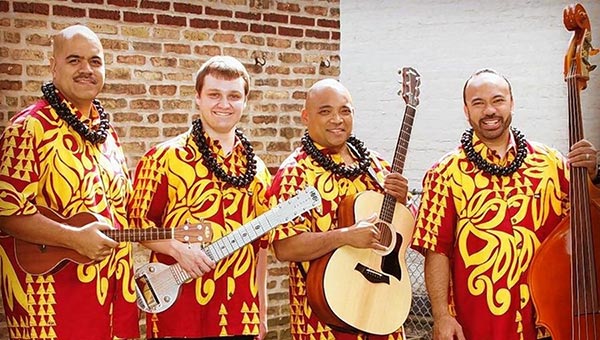 In 2014, Mark joined Chicago-based Hawaiian band, Hoapili. With Ron Cabanada on ‘ukulele, Keenan Kamae on ‘ukulele, Danny Yamamoto on bass, and Mark on steel guitar, the band performs at various venues throughout the Midwest. Their instrument lineup varies as situations dictate.

The Aloha International Steel Guitar Club (ASIGC) is an association of steel guitarists which was originally formed as an adjunct to the HSGA. Both organizations attracted steel guitarists and steel guitar entertainment worldwide. Throughout the years both organization experienced a decline in convention participation due to travel challenges faced by the aging participants, and there was no directed effort to attract a new set of participants. For awhile there was some discussion about disbanding the AISGC due to a loss of their convention site. However, the association persisted.

In 2018, Mark became president of the Aloha International Steel Guitar Club in Winchester, Indiana. There he worked to boost the organization's online and social media presence. He also worked with the festival committee to bring Hawaiian steel guitar masters to AISGC festivals in order to give seminars and perform. Under Mark's leadership the AISCG is now experiencing a revitalization.

Mark enjoys listening to steel guitar legends such as Jules Ah See, Sol Ho‘opi‘i, Jerry Byrd, and his teacher, Alan Akaka. Currently, Mark arranges and composes music for the steel guitar and hopes to release an album sometime in the future.

This video is from the Saturday Luau of the 2012 Hawaiian Steel Guitar Association (HSGA) Convention in Joliet, Illinois, and is one of Mark's first public performances. He's playing a duet with his instructor, Alan Akaka, with Addison Ching on bass, Ian Ufton on guitar, and Grifford "Kamaka" Tom on ‘ukulele. Also in the picture is steel guitarist Duke Kaleolani Ching, the luau's emcee.