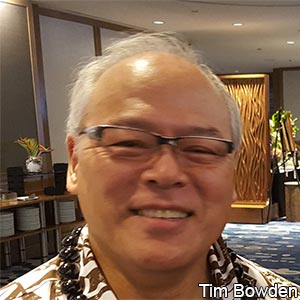 Dr. Isaac Akuna is from Kane‘ohe, Oahu. He is a graduate of the Kamehameha Schools Kapālama and it was there that he enjoyed playing music in various instrument ensembles and performing with groups that played Hawaiian music. He had always appreciated the sound of the Hawaiian steel guitar but it wasn't until he completed his formal education and established his business as a dentist that he was able to pursue a serious course of study with his teacher, Jerry Byrd.

In the years following Jerry's course Isaac continues to perform for a number of musical groups and agencies. He currently backs up Ku‘uipo Kumukahi and has collaborated with her on a number of recording projects. One of them, "Na Lani Eha" received HARA's Album of the Year award in 2008. In addition to recording the steel tracks, he served as the album's co-producer.

Isaac has performed with Ku‘uipo and the Hawaiian Music Hall of Fame Serenaders at Helumoa in the Royal Hawaiian Center in Waikīkī as well as throughout Hawai‘i and Japan.