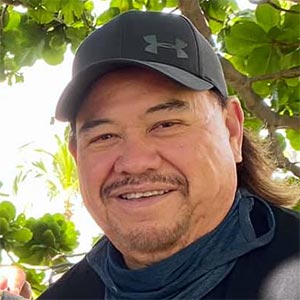 Elmer Lim Jr., better known as Sonny Lim, grew up playing ki ho‘alu (slack key guitar) in the Kohala region of the Big Island where the style originated. Sonny's father was a paniolo (cowboy) at Parker Ranch, where Sonny also worked for 23 years. His introduction to ki ho‘alu (slack key guitar) came as a child, when he was inspired by Gabby Pahinui while watching him perform at a luau in Kohala. Sonny's biggest inspiration and influence came at age 12 from a well known slack key guitarist and family friend, Uncle Fred Punahoa. Punahoa took a keen interest in Sonnys playing, and spent several weeks living with the Lim family in Kohala in order to teach him.

He was given a Steel Guitar as a youngster by Uncle Sonny Alapai of Puuanahulu and started to play it all the time. It led him to a professional career, playing the Steel Guitar with the Makaha Sons Of Ni‘ihau from 1975 to 1978. Over the past two decades Sonny has performed with virtually every name musician in Hawai‘i.

He is a multiple Hoku award winner, performs regularly with his family in Hawai‘i and Japan, and performed on Hawai‘i's first Grammy CD, Slack Key Guitar Volume 2 (Palm Records). His first solo recording effort, Slack Key Guitar - The Artistry of Sonny Lim features nahenahe (gentle voice) solo guitar tracks that is a nice mix of Sonny Lim originals with some classics thrown in.