This month we shine the Spotlight ON! Chuck Moore.

Luthier Chuck Moore is well known for his Moore Bettah Ukuleles one-of-a-kind ‘ukulele creations. However, for a long time Chuck also had another dimension to his interests – the Hawaiian steel guitar. Follow Chuck as he tells his story.

My first exposure to Hawaiian steel guitar came as a young boy when I heard "Song of the Islands" playing in the background of a scene in the Christmas classic, "It's a Wonderful Life." There was something so exotic and magical in those few seconds of music!

Around the same time there was feature story in Popular Mechanics magazine titled "Build Your Own Hawaiian Steel Guitar" that waxed poetically about whispering palms, white sand beaches and the music that accompanied those visions. Building the steel guitar was beyond me at that age but I did manage to cobble together a completely unplayable guitar out of cardboard and odd sticks of wood we had in the house. (I didn't know at that time how those formidable impressions would guide my later life.)

Growing up in San Francisco, we always had music in the house; mostly big band jazz and bebop but also the Kingston Trio, Pete Seeger and other folk groups at the time. But it was the jazz, the complexities of the arrangements that made the biggest impression on me. I'd listen to those LPs for hours on end, not understanding the arrangements but being fascinated by them anyway.

My brother was the band assistant for his high school and as a result brought home an endless variety of instruments for me to try out; everything from flute to violin. Nothing really stuck (although I did pursue the saxophone as a young adult) but the exposure to music and musical instruments was firmly embedded in my consciousness.

The garage band I formed with a few friends was also short lived (and terrible!) as there were a lot of distractions in the '60s in San Francisco at the time. 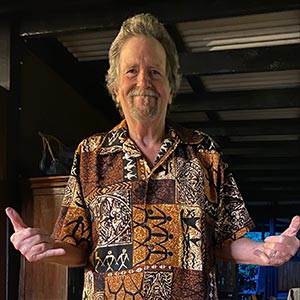 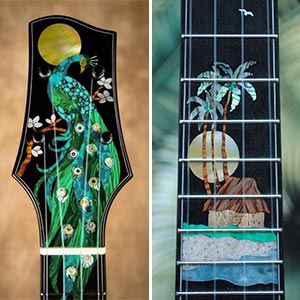 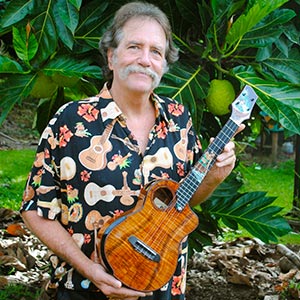 I've had a couple of false starts with my journey into the world of Hawaiian steel guitar. The mid 1980s found me fulfilling my long time dream of living on a tropical island with a move to the island of Moloka‘i where my love for the Hawaiian culture and music deepened.

That's when I started building ‘ukulele, fashioning them first from found coconuts and later graduating to the local, and more traditional, koa that is only found in Hawai‘i. I had little guidance as there were no other builders on the tiny island and no written resources to look to for help. Of course the was no Internet at this time so most of my lutherie education was pieced together by figuring it out by looking through mail order lutherie catalogues.

Radio station KPOA, from Maui, was the only station we could receive from that remote island but happily they featured music from Hawai‘i's "Golden Age" and it rekindled my love for Hawaiian steel guitar.

I soon made a trip to O‘ahu to buy my first steel guitar, a '70s era Rickenbacker, an amp and Jerry Byrd's "Complete Course for Hawaiian Steel Guitar," along with its thirty-some cassette tapes. I mean, how hard could it be? All these steel guitar players made it look so easy. You just slid the bar up and down while plucking a few strings! But again, without further resources or a teacher, it all made about as much sense to me as particle theory. After a frustrating year of making random noises and screeches I became discouraged and sold my gear.

A decade later we moved to the Big Island, to the rural jungles of lower Puna where I continued building "ukulele and playing it regularly. In 2011, local musician Keoki Kahumoku was selling some of his instruments to raise money for the victims of the Fukushima (Japan) nuclear disaster and amongst the gear he was selling was a '70s era Rickenbacker steel guitar similar to the one I had owned a couple of decades before.

At that point I had matured in my musical understanding and took it as a sign that it was time to pursue the steel guitar again. Again, I tried playing with no instruction, just a few tabs I found on the Internet, with the same dismal result. The demands of my business also allowed little time for anything but work and the guitar laid silent and gathered dust once again. But I couldn't get the steel guitar off my mind.

I then decided if I couldn't play one I could at least build one. After all, that's what I did! That's ALL I did, build instruments! I bought plans for a Weissenborn but they too sat on a shelf unattended. It seemed steel guitar just wasn't for me.

During this time I was diagnosed with rheumatoid arthritis, a condition which left my hand stiff and disfigured and meant I could no longer form the chords on the "ukulele. It looked like my days of playing Hawaiian music was over.

I also didn't like the direction that "ukulele music was heading at the time. Because of the world wide boom in popularity it seemed that the majority of "ukulele music was veering away from its traditional Hawaiian roots. At the same I had hoped that maybe playing with a steel bar would eliminate the problems caused by my arthritis. (This turned out to be true, with some adjustments necessary to my picks and playing style).

About four years ago during a trip to Waikīkī, we just happened upon a group of steel guitarists playing the music I adored and they were playing all day long! This was a time when we were likely still temporarily homeless. In May we had evacuated our home in Puna due to the Kilauea lava flow, the one that destroyed 800 homes. We had moved my shop and all our worldly goods into storage.

Luckily the lava stopped less than ½ mile from our home and we were able to resume our lives there after weeks of cleanup due to the ash fallout. But I think that's why we were in Waikīkī that fortuitous weekend. We were taking a break from all the stress of the lava flow and relocation.

Of course I later learned this was one of Alan Akaka's steel guitar festivals. I was in heaven and smitten again with the steel guitar. 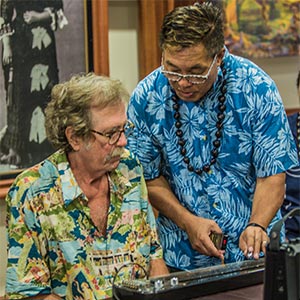 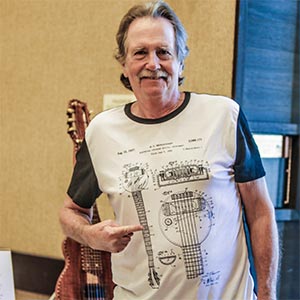 Did Chuck build his frypan from these blueprints?
PC-Don Touchi 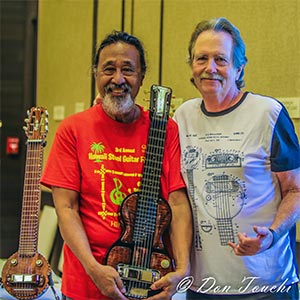 After I got home I began building several steel guitars, promising myself I would learn to play this time. I had recently made the decision to scale back my hours in the shop and now I finally had time to pursue music seriously, although at this stage in my life I wasn't fooling myself into thinking I'd be very accomplished at it.

I realized I needed a teacher and learned that Alan Akaka was giving Skype lessons. I made my plea to him that I was a "serious but devoted student of steel guitar" and hoped he had no regrets in taking me on. Happily, I've been with him for almost three years now. And although I still have no illusions of becoming an accomplished steel guitarist it's become the most rewarding (and frustrating) thing I've ever done.

I practice about 20 hours a week, always feeling I should be better than I am. I am more than happy to be a life long student. I try to spend as much time listening to music as I do practicing it, favoring the Hapa-haole tunes of the '30s and '40s, with Sol Ho‘opi‘i, Dick McIntire and the music of Alfred Akaka being at the top of the list.

Jerry Byrd was my original influence but I'm also inspired by all of the local great Hawaiian steel musicians as well as the music from the likes of Christo Ruppenthal and Sebastian Müller from Berlin.

Since Covid began I started making a series of videos every couple of weeks, just as a goof at first, but people seemed to like them so I've continued. They are far from professional but it shows a student's progress and hopefully will help me overcome a fear of performing and maybe inspire other new students as well. I also have a You Tube channel (because…doesn't everybody?) where many of these videos appear.

I am forever grateful to Alan Akaka, the HSGA, and all the professionals and students in the Hawaiian steel guitar community for keeping this almost forgotten instrument alive. It has given me a joy and fulfillment I never thought possible.

This video is of a performance by Chuck doing "Adventures in Paradise".

Copyright ©2022 by Hawaii Institute for Music Enrichment and Learning Experiences, Inc., and Cyberventures Unlimited. Terms of Use