This month we shine the Spotlight ON! Vickie Van Fechtmann.

Vickie Van Fechtmann is a familiar face at steel guitar festivals statewide. As with many steel players, Vickie got her start on the ‘ukulele but eventually transitioned to the steel guitar. 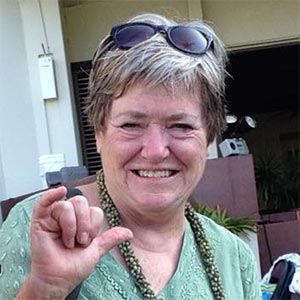 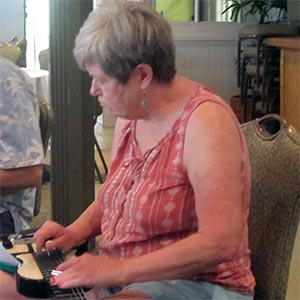 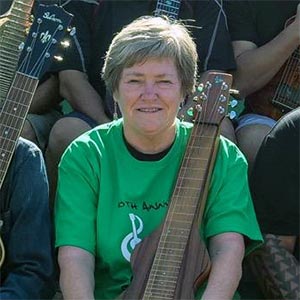 Vickie currently resides on the island of Hawai‘i, in the Kaimu-Kalapana area of Puna, with her cat Gabby (Named in honor of musician Gabby Pahinui) and her dog Mia.

"I was born and raised in Indiana, then moved to San Francisco where I lived for 12 years before retiring to Hawai‘i." While in San Francisco, Vickie worked at the Univerisity of San Francisco.

Vickie continues, "I think I was always interested in music and my mother tells me they bought me a record player as a child in the hopes I could learn to carry a tune! Both my parents liked music and we watched all those variety shows on TV—Dean Martin, Andy Willimas, etc.

"I started playing clarinet in the 6th grade and played throughout high school. I sang in church and school choirs."

Vickie went to Indiana University and studied French, art and later nursing. She worked as an RN for 35 years.

Vickie recalls her start in music: "I took up the ‘ukulele and became interested in Hawaiian music after discovering a group of ‘ukulele players who gathered to play in a café near where I worked in San Francisco."

"I met many friends through ukulele groups. I started going to a kanikapila in Alameda where Kalina Wong played steel guitar. I loved the sound and bought one."

Vickie took lessons for a year or so in San Francisco before moving to Hawai‘i Island. She met Kumu Alan Akaka when she attended the Hawaiian Steel Guitar Camp on Maui that preceded that year's Maui Steel Guitar Festival.

Vickie has been a steel guitar student of Kumu Alan Akaka for about 4 years.

Vickie's first public performance was at the Hawaiian Steel Guitar Association (HSGA) conference in Fort Collins, Colorado, in 2017, where she appeared with Kalina Wong and Rebecca Woo. That performance was soon followed by one on the Open Stage at the Maui Steel Guitar Festival as the HAGS – Hot All Girl Steelers!

Vickie has since played on the Open Stage at steel guitar festivals on Hawai‘i Island and Kaua‘i and has also participated in the livestreamed Hawaiian Steel Guitar Open Stage Showcases.

Vickie recalls that the very first steel player she ever heard was Gerald Ross at an ‘ukulele festival. "Then I started listening to Bobby Ingano. My favorite players are Kumu Alan, Bobby Ingano, Greg Sardinha, and Geri Valdriz. I also like Sol Ho‘opi‘i and Gabby Pahinui."

Besides her music, Vickie is involved with other discplines. "I have been taking ‘olelo Hawai‘i classes with kumu Kaliko Beamer Trapp for about 3 years. I also spend time doing wood block prints (moku hanga) and textile arts, weaving, dyeing, printing. I also volunteer with the Medical Reserve Corps on the Big Island."

Vickie concludes, "Playing the steel guitar has given me great pleasure and I have made so many wonderful friends. I get so much encouragement from all the players, professional and amateur alike. I really love watching the NextGen and seeing their progress year to year."

This video is of a performance by Vickie Van Fechtmann doing "Kaulana o Hilo Hanakahi" from the 2019 Kaua‘i Steel Guitar Festival. Vickie is backed up by Kumu Alan Akaka and Addison Ching.

Copyright ©2022 by Hawaii Institute for Music Enrichment and Learning Experiences, Inc., and Cyberventures Unlimited. Terms of Use